Low temperature is a determinative environmental factor, which can affect all aspects of plant life and determine their geographical distribution and productivity. According to the response to low temperatures plants are divided into some groups: frost- resistant, tolerant to ice formation (winter grasses, trees, shrubs); cold-tolerant plants, which can survive at low temperatures, non accompanied by ice formation (potatoes, carrots, radishes, ets); and cold-sensitive ones to low temperature, being damaged at a temperature below than 8°С (pea, nuts, corn, cucumbers, sunflowers, rice, soybeans, tobacco, cotton, ets). 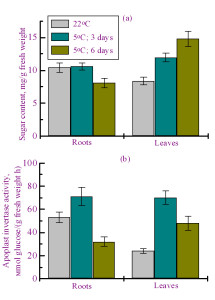 Fig. 1. Changes in (a) the content of glucose, fructose, and sucrose and (b) the activity of cell-wall invertase in the roots and leaves of potato plants under low temperature (5°C).

The first compartment of the plant cell, which gets low temperature signal and participates in its transduction and response, is the apoplast (extracellular space). The apoplast contains the cell-wall invertase (β-D-fructofuranoside-fructohydrolase, EC 3.2.1.26), which catalyzes sucrose forming two monosaccharide molecules (glucose + fructose). In plants, cell-wall invertase is involved in important physiological processes such as control over both sucrose outflow from leaves into other vegetative organs and transport of monosaccharide across the plasmalemma that increases total sugar contents in the leaves. The accumulation of soluble sugars in vegetative plant organs is one of obligate conditions for forming plant resistance to low temperature.

The purpose of this work was to investigate into the involvement of cell-wall invertase and apoplastic sugars in the tolerance of cold-resistant potato plants to low temperature. We used the potato (Solanum tuberosum L., cv. Désirée) plants, which were grown in vitro at 22°C and 16-hour long light day (illuminating intensity of 100 μmol photons/(m2·s). To study the cold-resistance the plants were cooled under a hardening temperature of 5°C for 6 days.

It was shown that the cell-wall invertase activity in the roots was twice higher than in the leaves at the optimum temperature (Fig. 1). During cold hardening in both vegetative organs there was increase in enzyme activity, moreover in the leaves it was higher than in the roots. Comparative analysis of total sugar contents (glucose, fructose, and sucrose) in the vegetative organs showed that leaves accumulated sugars more actively than in the roots during hardening. The sugar content in leaves increased 1.7 times-fold, whereas in the apoplast it did more than two-fold.

Taking into account that in nature, the underground part of cold-resistant plants is not damaged by short ground frost, the strategy of the plants adaptation is aimed at preserving structural and functional state of the cells of the above-ground part of plants.

The studies showed that in cold-resistant potato plants hardening process leads to the redistribution of soluble sugars in the leaves and roots in favor for the accumulation in the leaves. The increase in the essential cell-wall invertase activity in the leaves, revealed during cold hardening indicates significant changes in the cellular carbohydrate metabolism and regulatory function of this enzyme. It can be assumed that glucose and fructose were actively transported from the apoplast into the cytosol, where they performed protective function and were used for energy and synthetic processes in the cell. The enzyme substrate (sucrose) and the reaction products (glucose and fructose) are active multifunctional metabolites whose concentration in the cell and apoplast significantly affects the resistance forming of potato plants to low temperatures.