May-Thurner Syndrome – a rare cause of leg pain and swelling

In this case, a 75 year-old female presented with painful swelling in her left leg shortly after stents were placed in her iliac arteries, which are blood vessels in the upper thigh that allow blood to flow from the heart to the legs. A stent is a small, stiff tube made of metallic mesh-wire that is expanded within the blocked segment of a blood vessel, either an artery or a vein, to reestablish blood flow. Veins allow return of blood back to the heart and lungs, where oxygen is restored and the blood is readied for redistribution back to the body, and their blockage can often lead to the types of symptoms our patient was experiencing. Since the cause of her symptoms was most likely a blocked vein, pictures where taken by injecting a dye into the leg veins as well as the leg arteries. This allows for their visualization using fluoroscopy, an advanced-type of x-ray. These pictures showed that the flow of blood from her left leg was blocked by compression of the left iliac vein by the previously placed stent in the adjacent artery (Fig. 1A). This is an example of a rare condition known May-Thurner Syndrome. 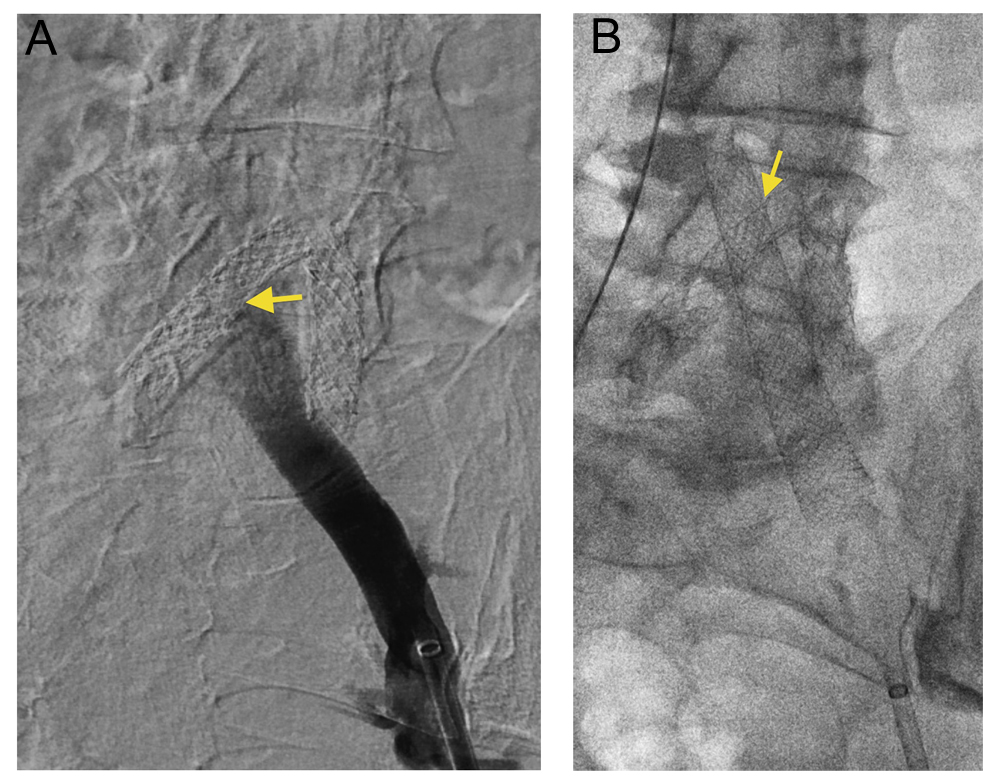 Fig. 1. A. Imaging of the vein in the upper thigh showing stoppage of bloodflow at level of the overlapping artery stent (yellow arrow). The mesh-wire appearance of the stents in the leg arteries can be seen.
B. A stent placed within the vein covers the region of compression by the previously placed arterial stent. The overlapping arterial and venous stents criss-cross at the region of previous compression (yellow arrow). Simutlaneous injection of dye into the veins and arteries demonstrated restoration of blood flow (not shown).

May-Thurner Syndrome is a specific condition caused by blockage of blood flow within the veins of the upper legs due to outside compression. This may result in painful swelling, similar to what was experienced by our patient, and discoloration of the legs. Another stent was placed in the vein at the site of compression to reinforce the vein and restore flow (Fig. 1B). Following placement of the stent, pictures of the arteries and veins within her legs were taken and showed excellent blood flow. After two weeks, she was seen in the office and had significant improvement in her symptoms. At her six-month follow-up visit, she continued to feel well.