Reactive oxygen species (ROS) have an amazing oxidative potential with oxidative stress and could abolish the integrity of living cells. Vigorous production of ROS can damage mitochondria and DNA, which would persistently destroy the cells and might eventually lead to various pathologies including cancer and neurodegenerative diseases. Upon initiation of cellular apoptosis, ROS-dependent oxidation may lead to the accumulation of damaged molecules with impaired functions, which could activate oxidative stress-induced signaling. The oxidative stress signaling is a crucial factor to promote cell death in response to a variety of bad pathophysiological situations. ROS are also the necrosis inducer as well as activator of autophagy, which are the alterations of cell survival and cell death. 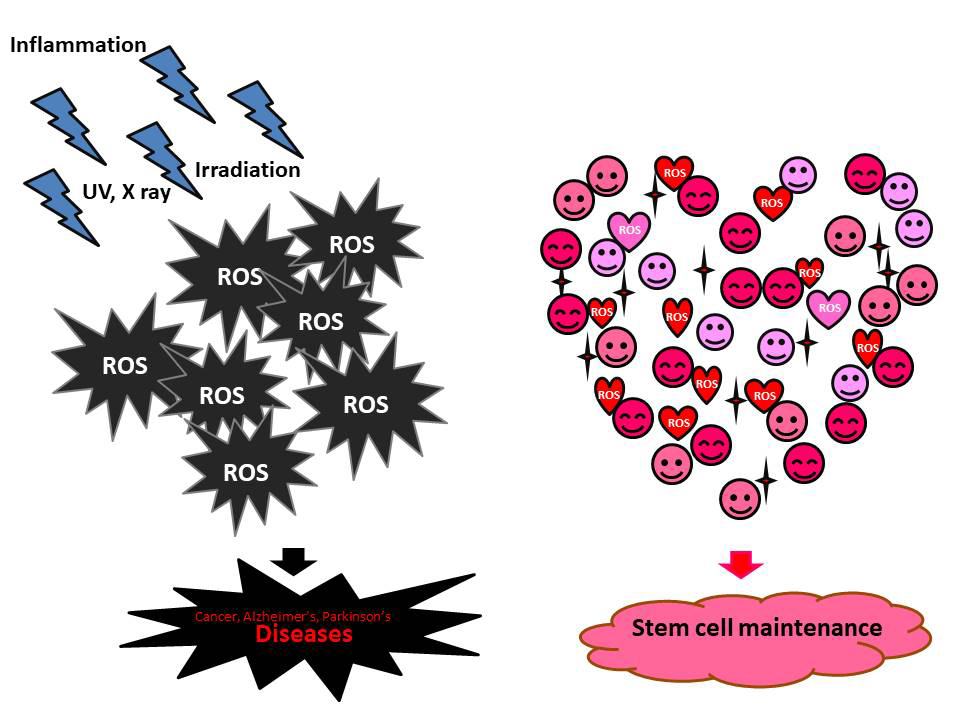 Despite the harmful effects of non-specific excessive oxidation, however, ROS also function as important physiological regulators. In host defense systems, for instance, neutrophils extinguish invading microorganisms by phagocytosis by bringing them into contact with bactericidal ROS. In addition, ROS might regulate the biological processes of various stem cells in the maintenance stages including proliferation and/or differentiation, etc. At certain levels, ROS may regulate transcription factor activity. For example, neural stem cells as well as mesenchymal stem cells require physiological level of ROS for self-renewal. Moreover, ROS production is critical for some types of stem cell aging and/or differentiation. Mitochondrial ROS production might be compulsory for muscle and adipocyte differentiation. Furthermore, increased mitochondrial ROS production impacts both proliferation and differentiation of pluripotent stem cells. So, ROS level may serve as an imperative factor that directs differentiation and/proliferation towards certain stem cell types. In neural stem cells, ROS-depended proliferation is at least associated with the partial oxidative inactivation of the tumor suppressor PTEN that is a negative regulator of PI3K/AKT pathways. Low levels of ROS are associated with quiescent stem cells, whereas the increased ROS level is typical for proliferating culture cells, suggesting that the fundamental link between certain levels of ROS and certain signaling pathways.

Here, two features of ROS function in cells have been conferred. The first one concerns harmful effects of ROS, which might bring individuals Devil diseases. On the other hand, the positive roles of ROS have been shown to participate in the regulation of various stem cells, not only in cell differentiation and premature senescence, but also in entering the cell cycle and stem cell proliferation, which might bring individuals Angel gifts (Fig. 1).