The loss of crops or decrease in crop yields due to drought has been and still is a major natural disaster, resulting in multiple devastating humanitarian and environmental impacts. This is becoming prevalent in almost every inhabited region in the world, in both developing and developed nations, and is expected to become more frequent and severe, at least in some areas, due to looming global climate change and human activity. This projection, together with the anticipated continuing increase in human population, calls for pressing measures to develop drought-resistant crops. Resurrection plants provide an attractive model for such developments. 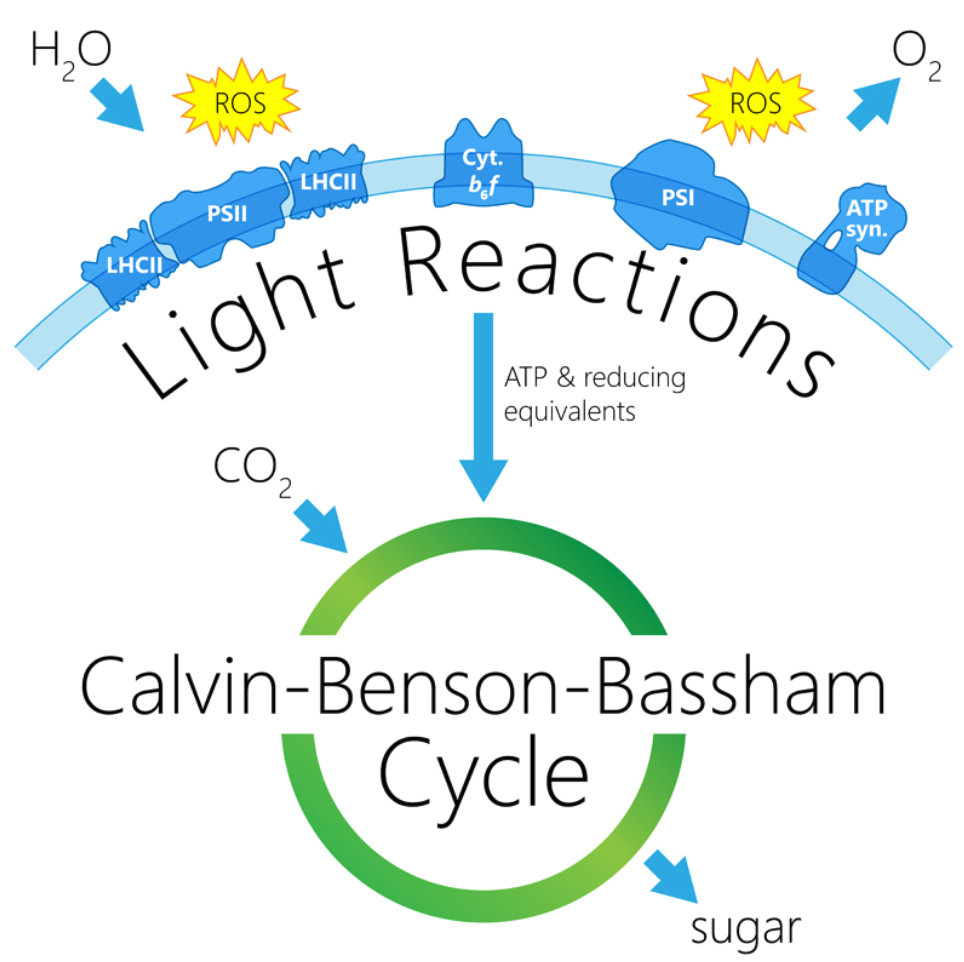 Fig. 1. The main components of the photosynthetic light-dependent reactions: photosystem II (PSII), the light harvesting complex II (LHCII), cytochrome (Cyt.) b6f, photosystem I (PSI) and ATP synthase (syn.). ATP and reducing power produced by the light reactions are utilized in the Calvin-Benson-Bassham (CBB) cycle for carbon fixation. Any imbalances between the light reactions and the CBB cycle may rapidly lead to enhanced formation of harmful reactive oxygen species (ROS) at PSI and PSII.

Resurrection plants are a diverse group of plants that possess the remarkable ability to tolerate nearly complete loss (~95%) of water, or desiccation, in their leaves for extended time periods, and regain full vigor within hours to several days following rehydration. There are two types of resurrection plants, based on whether they maintain or break down their photosynthetic apparatus in the dry state. This characteristic is important because when plants dehydrate, the primary, light-dependent, reactions of photosynthesis keep going, but the biochemical reactions that follow become inactive due to decreased uptake of carbon dioxide (effected by closure of the stomata) (Fig. 1). This imbalance results in the enhanced formation of ‘reactive oxygen species’ (ROS) – molecules that inflict damage onto various cellular components and can eventually lead to plant death. Poikilochlorophyllous resurrection plants cope with this problem by disassembling their photosynthetic machinery and degrading its components during dehydration; the price being the need to rebuild the system from scratch when water is available. Homoiochlorophyllous resurrection plants, on the other hand, maintain most of their photosynthetic complement in the dry state. This allows them to quickly resume normal function upon rehydration. Relatively little, however, has been known about how they are able to prevent ROS production or mitigate its destructive effects upon drying.

In a recent study, we investigated an African resurrection plant called Craterostigma pumilum using electron microscopy techniques, as well as functional and biochemical assays. Several major findings from this work provide important information into how homoiochlorophyllous resurrection plants protect themselves from oxidative damage in the dry state, while keeping most of their photosynthetic machinery. Using the freeze-fracture technique combined with scanning-electron-microscopy at low temperature (-120 °C), we visualized the photosynthetic protein complexes within their native environment, i.e. within leaf tissues. We found that during dehydration, the density of one of the major protein complexes of the photosynthetic light-dependent reactions, photosystem II (PSII), decreases. Upon further dehydration, PSII complexes were found to arrange into ordered arrays (Fig. 2), a process facilitated by the detachment of proteins that serve as light-harvesting antennae for PSII. Detachment of the antenna proteins reduces the amount of light energy that reaches PSII and consequently the photosynthetic electron transport chain. We also propose that the reorganization of PSII complexes into the ordered arrays is accompanied by internal rearrangements that act to dispel light energy that is still absorbed, further minimizing formation of harmful ROS in the dry state. Measuring the levels of other photosynthetic proteins, we found that the level of another protein, called cytochrome f, which is a component of a complex that is a major player in the light reactions, is reduced relatively early and markedly during dehydration. This probably serves to slow down the photosynthetic light reactions early after the onset of dehydration, minimizing the formation of ROS already at the initial stages of drying. 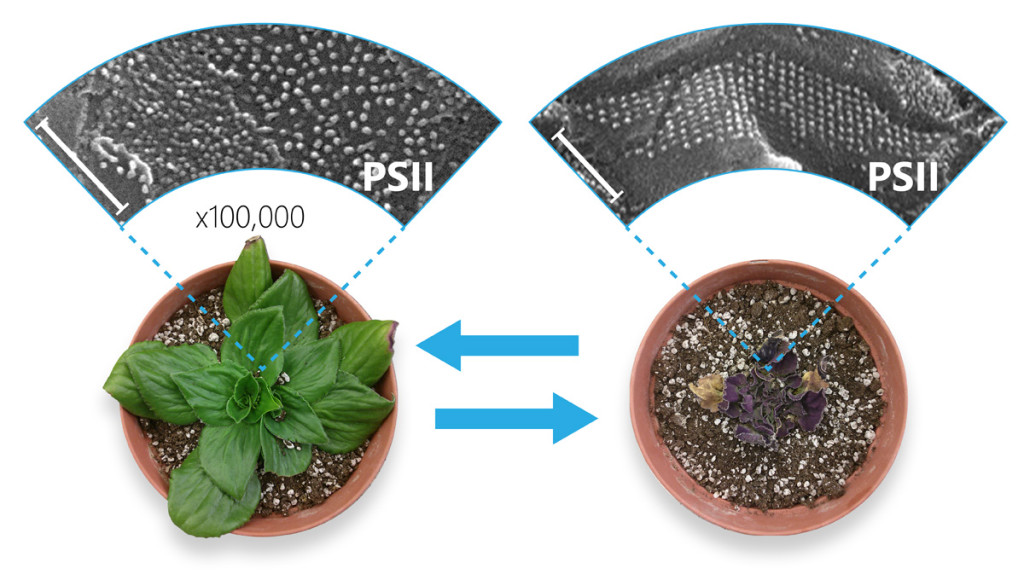 Fig. 2. The arrangement of photosystem II (PSII) complexes in hydrated (left) and dry (right) Craterostigma pumilum plants, as they are viewed in freeze-fractured leaves at a magnification of at least 100k. In the dry state, PSII are organized into ordered arrays that likely dispel absorbed light energy, and in this way lessen the formation of ROS. Scale bars: 200 nm.

This study provided new insight into how the activity of the photosynthetic machinery, which has the potential to be the source of harmful ROS, is shut down during dehydration of a homoiochlorophyllous resurrection plant. Together with additional findings relating to other cellular and molecular processes it will hopefully contribute to the unraveling of the mechanisms used by these plants to withstand desiccation in their leaves and, ultimately, pave the way to improving drought tolerance in crops.