In living organisms, all cells contain different compartments called organelles. Each organelle, surrounded by lipid membranes, includes a characteristic set of resident molecules. Maintenance of such precise set of components in each organelle is critical for proper cell functioning. This is achieved by mechanisms that ensure proper sorting (distribution) of molecules among organelles.

A continuous exchange of proteins and lipids takes place between intracellular compartments in a process known as membrane (or protein) trafficking. Molecules are carried by transport vesicles. These transport pathways involve sorting of newly synthesized proteins at the Golgi apparatus for delivery to their suitable destination. For instance, in a polarized epithelial cell – such as in the kidney or the intestine – proteins are transported either to the apical surface (facing the epithelial lumen), or to the basolateral surface (facing the tissues). From each surface, proteins can enter the cell by endocytosis into vesicles, called endosomes. There, proteins are again sorted for delivery to other destinations (Fig. 1; arrows). One of these pathways is retrieval from endosomes back to the Golgi. A protein complex called retromer is required for this retrograde pathway (Fig. 2; arrowheads in the inset of this image taken by confocal fluorescence microscopy point to retromer-coated tubules, in green, emanating from endosomes, in red). 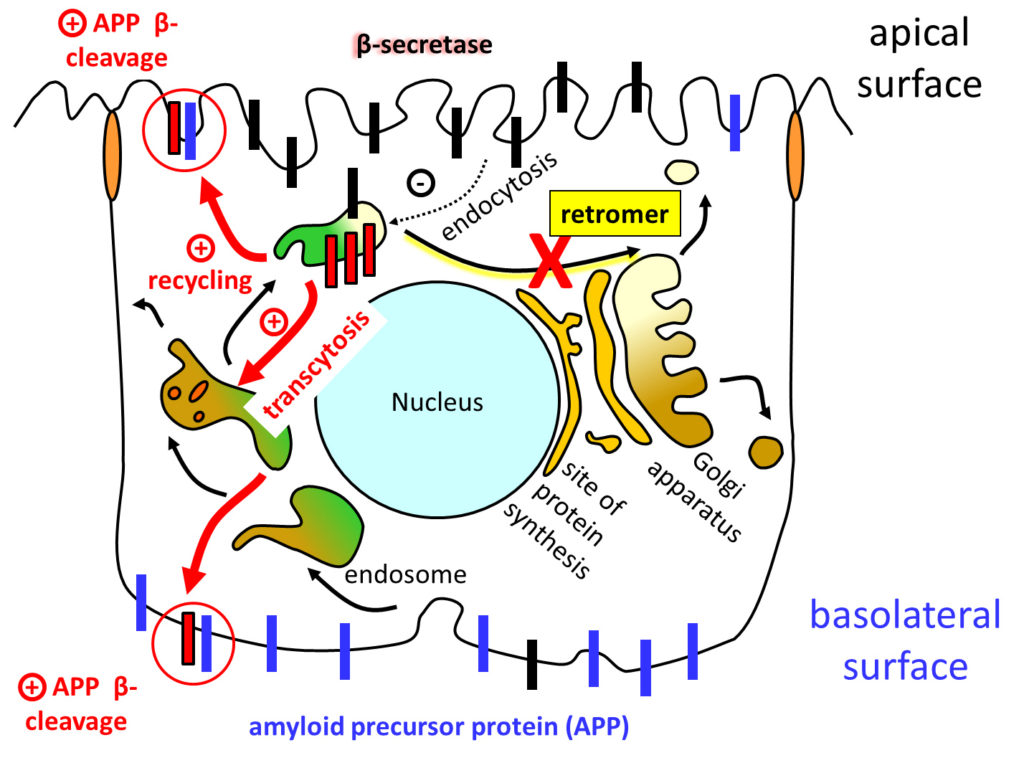 In the late 90’s, retromer was discovered by Matthew Seaman, Scott Emr and coworkers in a simple laboratory organism, the baker’s yeast. From additional studies by many researchers, we now know that retromer is conserved throughout evolution, performing the same role in human cells. We know how retromer assembles and sorts its cargo. Yet, other important functions performed with cooperating molecules have also been found. Thus, retromer ensures proper localization of proteins in epithelial cells and neurons, both cells with complex trafficking pathways (Fig. 1).

Trafficking is very important in neurons. Specialized machinery carries molecules travelling long distances to axon terminals and, in retrograde movement, to the dendrites. This makes neurons more vulnerable to small alterations in vesicle transport. Indeed, many human neurodegenerative disorders arise from trafficking defects. In this regard, alterations in retromer cause developmental defects and disease. In particular, defective retromer function is implicated in Alzheimer’s (AD) or Parkinson’s disease. 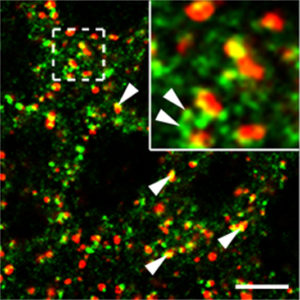 In AD, neurodegeneration appears caused by deposition of the β-amyloid (Aβ) peptide, originated by initial cleavage (scission) of the so-called amyloid precursor protein (APP) by an enzyme, β-secretase. There is a lot of scientific evidence showing that increased encounters between APP and β-secretase promote β-cleavage of APP by the enzyme and, in the long run, AD-associated neurodegeneration. We and other researchers have found that disruption of retromer-mediated transport (Fig. 1; red X) alters the β-secretase trafficking route. It turns into β-secretase accumulation in endosomes, reducing endocytosis, but promoting recycling (from endosomes back to the cell surface) and transcytosis (the pathway to the other surface domain). Altogether, this favors interaction between APP and β-secretase, causing β-cleavage of APP and thus Aβ production.

Other important neuronal diseases related to retromer alterations include Down syndrome (trisomy 21); a type of Charcot-Marie-Tooth disease (a progressive disorder of the peripheral nerves); prion diseases (rare progressive diseases causing neuronal loss); hereditary spastic paraplegia (rare genetic disorders showing progressive weakness and increased muscle tone and stiffness of leg muscles); and neuronal ceroid lipofuscinosis (a diverse group of neurodegenerative disorders causing progressive, permanent loss of motor and psychological ability). Therefore, an important challenge for future studies will be to investigate how defective retromer in neurons can cause such important diseases.