RKIP and YY1: The ‘good’ and the ‘bad’ shields in the protection of cancer spreading and resistance to therapies

Cancer originates from all of the uncorrected mutations occurring in the DNA of the cell that lead to abnormal cell growth. Accordingly, the accumulation of these mutations transforms a normal cell into an “immortal” cancer cell with aggressive and invasive behavior among the rest of the normal cells; a process known as tumor spreading, or metastasis. Furthermore, cancer cells require additional modifications to support their survival and avoid their eradication mediated by the immune system, or conventional treatment modalities. 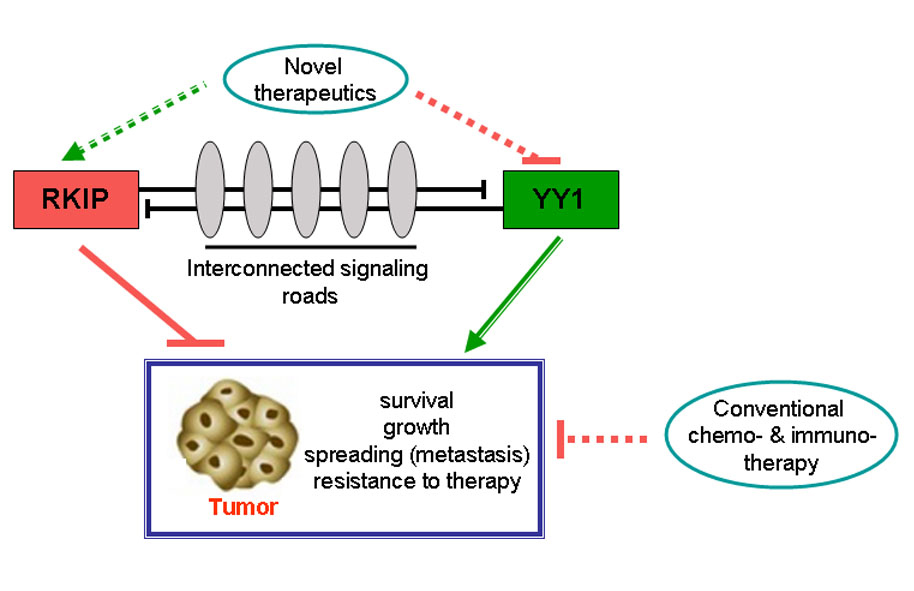 Fig. 1. RKIP and YY1 interplay in regulating tumor survival, growth, spreading and resistance to therapy. The inverse correlation between RKIP and YY1 expression patterns observed in cancers, could be explained by the hypothesis that the expression of one contradicts the expression of the other through crosstalk of the signaling roads that control their expressions at the molecular level. We describe five possible interconnected signaling roads (oval cycles) which provide evidence for YY1’s negative regulation of RKIP and vice versa. In these roads, YY1 represents the green traffic light (green lines) which promotes cancer properties, including tumor spreading and resistance to therapy, whereas RKIP acts as the red traffic light (red lines) that stops tumor functions. Accordingly, the YY1/RKIP motif may serve as a potent therapeutic target and novel RKIP-inducing and/or YY1-inhibiting regimens may be proved efficient in inhibiting tumor metastasis and resistance to therapy, when used alone, or in combination with conventional therapeutics.

To understand the above cancer cell behavior, we present the interrelationship between two cellular proteins that we have studied, namely, RKIP (Raf Kinase Inhibitor Protein) and YY1 (Yin Yang 1). We have found that RKIP and YY1 have opposing roles in the regulation of tumor cell growth, metastasis, and resistance to therapies. As predicted, RKIP is poorly expressed in many cancer types, since it augments tumor response to therapy and inhibits cancer metastasis. In contrast, the YY1 protein that enhances tumor growth, metastasis, and resistance to therapies is overexpressed in the majority of cancers. Given the inverse correlation found between the expression levels of YY1 and RKIP in many solid and hematological malignancies, we have hypothesized and determined that these two proteins are closely related and that each regulates negatively the expression of the other, through several complex and interconnected signaling pathways (roads). Similar to traffic lights, YY1 (the green light) and RKIP (the red light), promote or inhibit tumor properties, respectively (Fig. 1). On this context, we describe and analyze five possible interconnected signaling roads, which explain the inverse relationship found between the expression levels of RKIP and YY1 in cancers. Each interconnected road is comprised by multiple interactions among intermediate proteins with established pro- or anti-cancer functions. These five interconnecting roads may behave each individually, or together, and overall influencing the ultimate expression levels of YY1 and RKIP; hence leading to determining new approaches to predict tumor cell response to chemo-/immuno-therapies, as well as tumor aggressiveness.

In addition, these pathways also provide novel prognostic motifs and therapeutic targets and establish the significance of developing new regimens that will be able either to increase or diminish RKIP and YY1 expression levels, respectively. This will result in blocking the cancer cell survival, growth and spreading, as well as overcoming tumor resistance to existing anti-tumor therapies. Noteworthy, alternative combinational therapeutic approaches, that involve the above suggested regimens and low doses of the conventional therapies may augment the efficacy of the anti-cancer treatments and the overall patients’ survival.