Diagnosis and treatment of cardiovascular diseases (CVDs) are a great challenge for today’s medicine. It also results from not fully explained pathomechanisms underlying their development and progression. The group of CVDs is a very complex mixture of different disorders, which exhibit similar symptoms. According to the World Health Organization (WHO) reports, CVDs are the main cause of death worldwide. For this purpose, there is an emerging need for explaining mechanisms responsible for their development and progression. In consequence, it may lead to provide new, more reliable diagnostic tests and more effective CVDs treatment strategies. 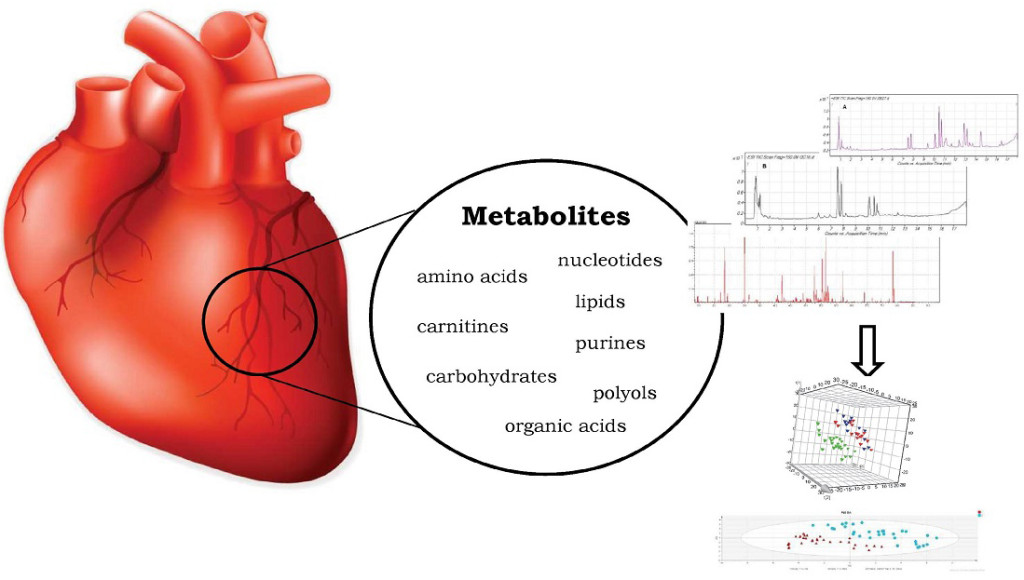 Nowadays, in the aspect of searching for new potential markers, the metabolomics approach is widely applied. Metabolomics is a field of science focused on the analysis of small compounds, namely metabolites, which are present in all living organisms. Metabolites are simultaneously products and substrates of biochemical pathway reactions, and play fundamental role in organisms’ functioning. According to this fact, these small compounds are the best reflection of current organisms´ state and can provide information about “disturbances” related to disease presence, development or progression. In metabolomic studies, several types of biological material are used, for instance blood (serum or plasma), urine, saliva, tissue. Whereas blood and urine are the best reflection of the whole organisms´ state, tissue represents local metabolites composition related to health or disease status. Analysis of samples collected from both healthy and disease individuals, followed by comparison and biochemical interpretation of data obtained, provide information regarding qualitative and quantitative changes in metabolites´ profiles related to pathological processes.

A lot work has been done in the field of application of metabolomics in CVDs investigation. In our work we reviewed research articles describing utilization of liquid chromatography (LC), gas chromatography (GC) and capillary electrophoresis (CE) coupled with mass spectrometry (MS), as well as nuclear magnetic resonance (NMR) spectroscopy in metabolomic studies regarding: atherosclerosis, coronary heart disease, hypertension, stroke, heart failure, atrial fibrillation, pulmonary heart disease, peripheral arterial disease, as well as kidney and metabolic disorders as strictly related to higher risk of CVDs development as possible. Published articles are based on studies with the application of both human and animal models of the disease. For instance, in pulmonary arterial hypertension, alterations in glycolysis and oxidation pathways were confirmed in both models (human and animal).

As it is widely known, hypertension is one of the most frequently occurring CVD and the treatment of this disease is still a big challenge. According to metabolomic studies performed on plasma and urine samples obtained from both healthy and disease individuals changes in amino acids levels were detected most frequently. As another example, levels of several compounds (i.e. amino acids, fatty acids, bile acids) have been suggested as altered within different stages of atherosclerosis development. Observed changes are related to the clinical and histopathological symptoms of the disease and has a putative potential to explain them.

In conclusion, metabolomics has a great possibility in the interpretation of disturbances in biochemical processes underlying CVDs development. Though, it is still a great challenge to find a new, specific biomarker, and much more has to be done in this aspect. Nevertheless, metabolomics opens a new perspective for future prevention, diagnosis and therapy for such a complex group of diseases as CVDs.