Fluorescence switching in response to external stimuli, namely mechanofluorochromism, is highly interesting as this phenomenon can potentially be exploited for sensor, memory, and security ink applications, etc. These responses generally depend on structure alteration upon a mechanical perturbation. Dibenzoylmethanatoboron difluoride (BF2DBM) derivative exhibits mechanofluorochromism, which was reported by Fraser et al. The emission wavelength is significantly red-shifted upon rubbing/smearing the samples. The samples then revert to the original emissive species over time. This is the first finding of thermally backward type (t-type) mechanofluorochromism. There are many substituted BF2DBM complexes with mechanofluorochromic properties that influence their emission color and reaction speed. 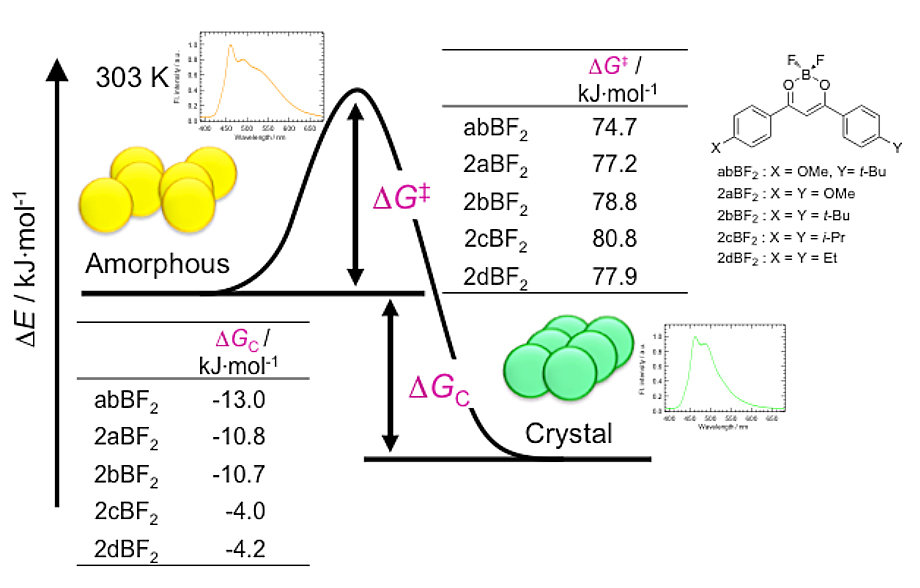 We have we reported thermodynamic analysis of the mechnochromic backward reaction of BF2DBM derivatives. We clarified the thermodynamic parameters and their values based on the temperature-dependence of the thermally backward reaction for three types of BF2DBM derivatives having tert-butyl (t-Bu) and methoxy (MeO) groups (abBF2), two tert-butyl groups (2bBF2), and dimethoxy groups (2aBF2). That study revealed for the first time that the formation of the transition state was governed by both enthalpic (ΔH‡) and entropic (ΔS‡) terms and the activation energy of the reactions is controlled by the substituents. The data suggested that the mechanochromism could be controlled by ΔS‡ depending on the substituents. Thermodynamically, ΔS‡ functions as an indicator of the sterical state and order of species. The kinetics of the mechanofluorochromism of BF2DBM derivatives is governed not only by intermolecular interactions assisted by substituent groups, but also by the molecular order in the solid state, as revealed by temperature-dependent fluorescence changes. The ΔH‡ and ΔS‡ are determined by evaluating the effects of temperature on the time-dependent changes of the fluorescence intensity of the amorphous samples induced by mechanical grinding by using Arrhenius and Eyring plots. The thermodynamics of the amorphous–crystalline phase transition are discussed based on data obtained by differential scanning calorimetry (DSC).

The drop-casted abBF2 powder exhibited blue emission. The fluorescence spectrum originated from the cyan crystal as previously observed. After rubbing the sample with a spatula, the fluorescence color was changed from blue to yellow, originating from the amorphous state of abBF2 and the fluorescence intensity of which decreased as time elapsed. The yellow fluorescing species changed to green emitting species at room temperature. The ΔH‡ of BF2DBM derivatives with MeO groups (2aBF2) was larger than that of derivatives with alkyl groups (2b–dBF2), whereas the ΔS‡ was smaller than that of derivatives with alkyl groups. It is proposed that the reaction dynamics of 2aBF2 will be governed by rotational motion around the MeO groups. Interestingly, the Gibbs energies of activation (ΔG‡) were comparable for the reactions of all members of the BF2DBM series, though ΔH‡ and ΔS‡ were strongly dependent on the identity of the substituent. The substituent-dependent DS‡ term is one of the key parameters for understanding the mechanofluorochromism of BF2DBM derivatives associated with the amorphous–crystalline phase transition. Based on these findings, we present a schematic representation of the reaction coordinates of the thermally backward reaction of BF2DBM derivatives.

It is proposed that the ΔS‡ terms for the thermally backward reaction are governed by the solid-phase reaction controlled by the substituent groups, suggesting the key parameters for understanding the mechanofluorochromism of BF2DBM derivatives. The substituent groups influence the rate of the thermally backward reaction, where the reaction rate is most plausibly controlled by intermolecular interactions between the BF2DBM derivatives as well as their rotational motion. On the other hand, the Gibbs energy of crystallization (ΔGc) estimated by DSC curve is dependent on the molecular packing mode in the crystal, meaning that a higher degree of overlap results in stronger intermolecular interactions, such as π–π interaction. Furthermore, these findings open an avenue for fabrication of organic optoelectronic materials based on the crystalline-to-amorphous transition. Thermodynamic studies of the amorphous-crystalline transformation will be useful for the molecular design of organic molecular solids.