TAFRO-syndrome and idiopathic multicentric Castleman disease: An analysis of a new subtype of the rare disease

Castleman disease (CD) is a group of three rare, poorly understood diseases that all involve excessive lymphocyte quantities. All three groups, therefore, are categorized as lymphoproliferative disease. The three groups of Castleman disease share similar lymph node examinations and characteristics under the microscope, but varied clinical symptoms. Unicentric Castleman disease (UCD) describes a single region of enlarged lymph nodes. Multicentric Castleman disease (MCD) describes multiple regions of enlarged lymph nodes, and typically involves more severe symptoms than that of UCD. MCD can then be further divided into two sub-categories: Human Herpes Virus-8 (HHV-8)-associated MCD and HHV-8-negative- idiopathic, meaning of an unknown cause, MCD (iMCD). Organ dysfunction, specifically of the kidneys and liver, are common symptoms to both iMCD and HHV-8-associated MCD due to a cytokine storm, specifically interleukin-6 (IL-6). Cytokines are any type of substances secreted by the immune cells. As of right now, iMCD does not have a known cause. 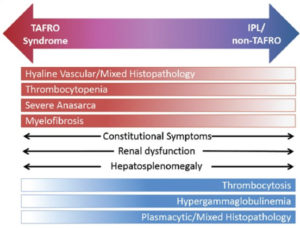 Castleman disease was first described by Benjamin Castleman in the 1950s. In the past, there has been a difficulty confidently diagnosing patients with CD due to a lack of international classification of disease (ICD). However, due to an increase in awareness and patient-centered research by the Castleman Disease Collaborative Network (CDCN), a new global community of patients, researchers, and clinicians has been assembled.

Once the disease was found to affect not just one region of lymph nodes, but multiple regions, is when the differentiation of UCD and MCD first occurred. Typically, UCD can be treated successfully with surgery. MCD, however, is more complicated. MCD is further divided and characterized by HHV-8 positive and negative patients. Those who are diagnosed with HHV-8 positive MCD are typically immunocompromised. The other MCD is HHV-8 negative, idiopathic MCD (iMCD). A series of 60 patients with iMCD from 2012 showed a 10-year survival rate of around 40%. Treatments for MCD include chemotherapy, anti-inflammatory therapies, and blockades of the cytokine storms, specifically anti-IL-6 therapies. The estimated amount of individuals diagnosed with any form of CD in the U.S. is around 6500-7700 every year.

Increasing information and research on iMCD has brought to light a new subtype within iMCD, TAFRO syndrome. TAFRO stands for the symptoms experienced by the patient: thrombocytopenia (T), anasarca (A), fevers (F), reticulin myelofibrosis (R), organomegaly (O). Thrombocytopenia is a low blood platelet count, anasarca is the swelling of the skin due to fluid accumulation, fever is an elevation of the body’s temperature, reticulin myelofibrosis is an increase in the scarring of the body’s bone marrow, and organomegaly is the abnormal enlargement of organs. Non-TAFRO patients typically have thrombocytosis, or an increase in platelet numbers, some fluid accumulation, and hypergammaglobulinemia, an increase of immunoglobulin levels in the blood. TAFRO was first described by Takai et al. in 2010. The majority of the cases involved were in Japan, however, there was a Caucasian case in Europe and 2 cases in the United States.

It is still unclear whether TAFRO is simply the most severe form of iMCD, or whether there is an overlap with iMCD and TAFRO. Some case reports have even suggested that IL-6 may not be a component in TAFRO, and it is actually vascular endothelial growth factor (VEGF) that is more important. VEGF is a substance that stimulates formation of blood vessels. Further research needs to be done to conclude this, though.

In conclusion, TAFRO syndrome is still unclear in many regards: the cause, pathology, and treatment. TAFRO may have a completely different pathogenesis from other cases of iMCD, therefore the therapeutic approaches to TAFRO will differ as well. Continuous clinical research and support may be the key to better understanding TAFRO syndrome and Castleman disease.