The noxious effects of benthic diatoms on marine invertebrates

Diatoms dominate various marine and freshwater environments, at any latitude, and are responsible for up to 25% of primary production. They may be either free-living in the water column or produce benthic biofilms. Studies on the chemical ecology of benthic diatoms are insufficient and there is little information on the secondary metabolites that they produce, due to difficulties in their collection, isolation and culture. Although benthic diatoms can adapt to a range of microenvironments, usually they prefer live substrates, as the surface of macroalgae and seagrasses, as compared to abiotic substrates, due to the competition of larger autotrophs representing further colonizers. Benthic diatoms are important food sources for small benthic grazers, including polychaetes, crustaceans, gastropod molluscs, sea urchins and fish (Fig. 1). Some benthic diatoms, as various species of Cocconeis, are able to induce a sex reversal in the shrimp Hippolyte inermis, a benthic opportunistic herbivore. 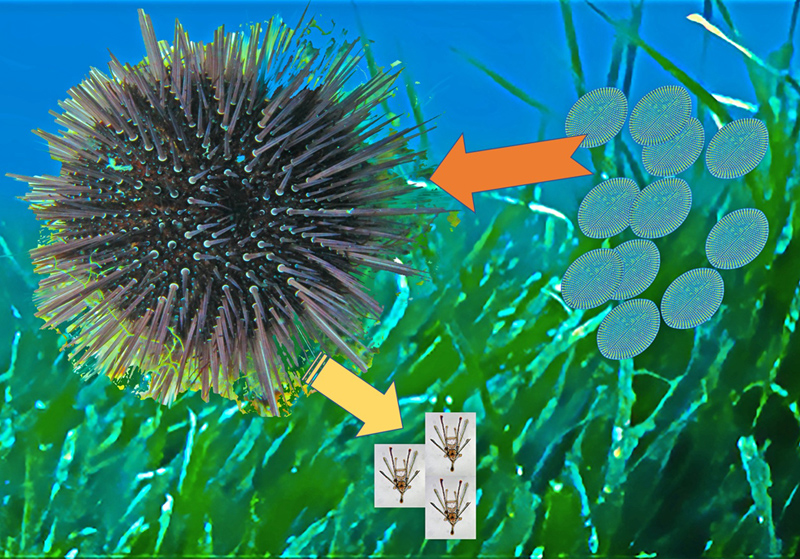 Fig. 1. Sea urchins commonly living in seagrass meadows were fed on benthic diatoms and the viability of their embryos and larvae was analysed by means of morphological analyses and molecular tools

The secondary metabolites inducing this natural process of sex reversal are still unknown, although various details of this influence have been investigated. Massive cultures of two benthic diatoms, Cocconeis scutellum and Diploneis sp. (Fig. 2A-B), common epiphytes on the leaves of the seagrass Posidonia oceanica and consequently often ingested by the sea urchin Paracentrotus lividus, were grown on a 2% vegetal substrate agar, harmless for sea urchins. These diatoms are slow-growing species, and their ecological role might be quite different. In fact, Cocconeis spp. are among the most adherent and strictly benthic diatoms, seasonally dominating microalgal communities of seagrass leaves, while Diploneis spp. are moderately adhesive, fast growing, typical of seagrass periphyton.

After the set-up of an adequate microcosm, the following experiments were performed: i) adult sea urchins were fed one month on these two benthic diatoms (Fig. 2C), using the green alga Ulva rigida as a control food; ii) embryos spawned from adults under forced feeding were followed until the pluteus stage (48 hours post-fertilization); iii) a de novo transcriptome assembly and annotation of P. lividus embryos were generated, to identify differentially expressed genes. Comparing the fertilization success and the embryos in which the first mitotic cleavage occurred (two-blastomere stage) with those tested at the beginning of the experiments, no significant differences were found among the three diets. In contrast, morphological observations of the pluteus stage showed a significant increase in the percentage of malformed embryos in sea urchins fed on Diploneis sp., in comparison with sea urchins fed on C. scutellum, which were similar to control embryos (fed on U. rigida; Fig. 2D). Malformations induced by Diploneis sp. mainly affected the arms, spicules and apices, as compared to control embryos. Analysis of differentially expressed genes indicated that i.) a large number of genes were up- and down-regulated in treated samples with Diploneis sp. compared to the controls (Fig. 2E); ii.  Over-represented Gene Ontology categories included oxidation-reduction process, translation, proton and electron transmembrane transport, ATP/RNA/GTP/heme/calcium and metal ion binding, NADH dehydrogenase activity, cytochrome c oxidase. 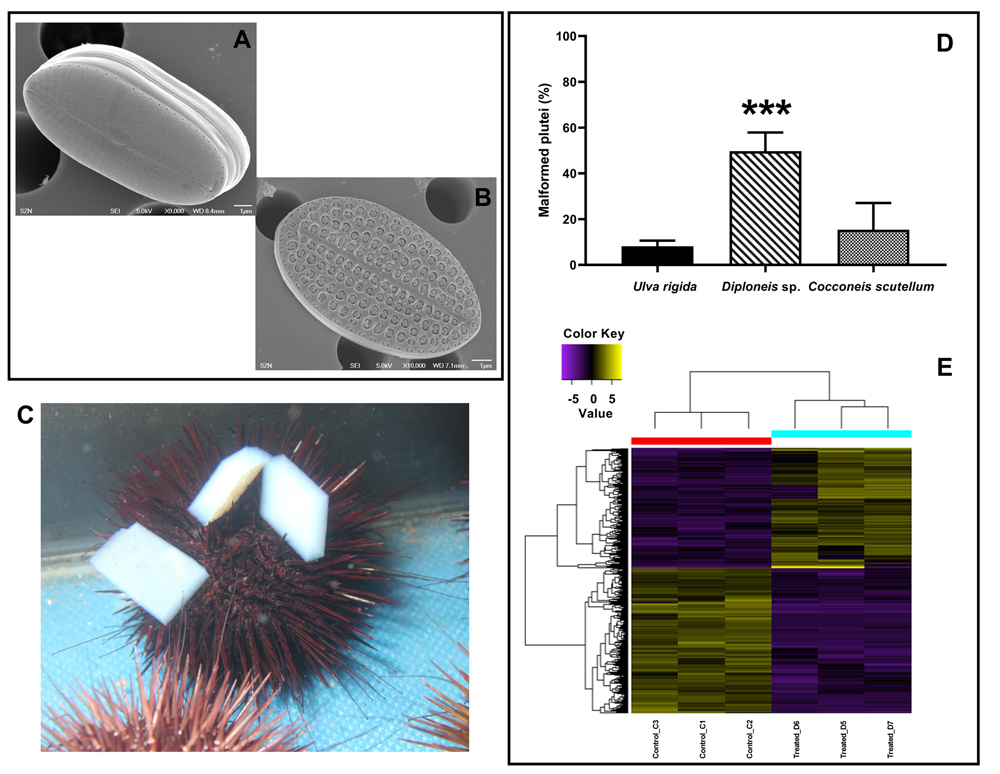 Fig. 2. The methods and the main results obtained. Cocconeis scutellum (B) and Diploneis sp. (B), diatoms used for the experiment. Adult sea urchins were fed one month on diatoms grown on agar blocks (C); Per cent of malformed plutei produced according to the diet (D); Heat-map of genes up- and down-regulated in samples treated with Diploneis sp., compared to the controls (E)

Large-scale genomic information greatly improved the limited molecular tools available for P. lividus, despite its importance as a marine model organism. Moreover, current studies are focusing on the chemical characterization of secondary metabolites produced by these benthic diatoms, in order to isolate and characterize natural compounds possibly useful for biotechnological applications, including pharmaceutical, nutraceutical and cosmeceutical applications.