Imagine if you had to construct an intricate factory consisting of layered platforms interconnected with long tubes, using Lego pieces. The task would become more complex if this assembly would have to be periodically dismantled and rapidly reconstructed in smaller duplicate copies and also have the capacity to bud off and transport smaller parts of itself constantly, without losing its integrity. To work out both methods and principles to guarantee this difficult operation running seamlessly and being error-free, would be a considerable challenge. 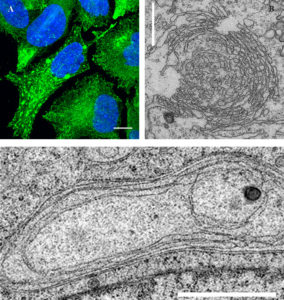 This is what cell biologists have been painstakingly trying to achieve in the last decades: to work out how the Endoplasmic Reticulum (ER), an enormous cellular compartment consisting of flat sacs (sheets) and interconnecting tubules, whose constituents are lipids and lipid-loving proteins, is made and how it disassembles and reassembles during cell division. Why is this research important? Because the function of the ER is critical for life as the site of synthesis, processing and assembly of all cellular proteins as well as the membrane supplier and membrane flow regulator; its sheer size is impressive, ER accounts for about 50% of the total membrane volume in the cell. Furthermore, ER processes involving key players have been implicated in human disease (Alzheimer’s, hereditary spastic paraplegia). Biologists have begun to decipher aspects of how the ER structure is made, they have identified ER proteins that work as wedges, creating membrane curvature, or as scaffolds, bringing membrane sheets in proximity or creating three-way tubule junctions, or as bridges that keep luminal sheets at a constant separation. Currently, we understand more on how ER tubules, rather than ER sheets, are generated.

In our study, we focused on the specific role of transmembrane protein TMEM170A, a protein conserved in major eukaryotic phyla. TMEM170A localizes on ER and also the nuclear envelope. The nuclear envelope is composed of two lipid bilayers, the outer nuclear membrane, being contiguous with the peripheral ER, and the inner nuclear membrane, which contacts the lamina and the chromatin (genome). The two membranes form flat membrane sheet-like structures, which are fused at the nuclear pore complexes, “gates” through which selective bidirectional transport of macromolecules occurs between the cytoplasm and the nucleus of cells. When we experimentally silenced or overexpressed TMEM170A in human cells, this altered ER shape and morphology. Ultrastructural analysis revealed that down-regulation of TMEM170A induces tubular ER formation specifically (Fig. 1A-B), while overexpression of TMEM170A induces ER sheet formation (Fig. 1C), indicating that TMEM170A is a novel ER protein that functions specifically in shaping ER sheets.

Thus, TMEM170A has profound effects overall in different aspects of membrane morphogenesis in human cells. But how does TMEM170A function as an ER sheet-forming protein? We found that TMEM170A interacts with RTN4, a well-known tubular ER shaping protein, whose overexpression results in ER tubule proliferation. In our study, we established that simultaneous co-silencing of TMEM170A + RTN4 not only rescues ER-related abnormal phenotypes observed during depletion of TMEM170A, but actually restores all other aberrant phenotypes related to nuclear size, nuclear pore complex formation and localization of inner nuclear envelope proteins. The bigger image that these results allow us to build is that protein levels of tubular- and sheet-forming ER proteins can be the determinant of the ratio of ER tubules to ER sheets. We conclude that the activities of TMEM170A and RTN4 are in a functional “tug of war”, where TMEM170A appears to shift the balance towards ER sheet formation while RTN4 promotes tubular ER production.