Biomarkers for Alzheimer’s disease diagnosis: an eye on retinal inflammation

Alzheimer’s disease is one of the most common neurodegenerative disorders. Alzheimer’s disease cases are constantly increasing worldwide due to population aging. Typical symptoms of the disease include memory loss, cognitive deficits, personality and behavior modifications. At the cellular level, Alzheimer’s disease is characterized by the accumulation of protein aggregates forming amyloid plaques and Tau tangles. These changes are followed by neuronal damage and death and seem to occur in the cortex and hippocampus first and then throughout the brain. Interestingly, it is thought that proteins aggregation take place during a pre-clinical stage, several years before the classic Alzheimer’s disease symptoms start to appear therefore, an early diagnosis could be the key point for an effective therapy. 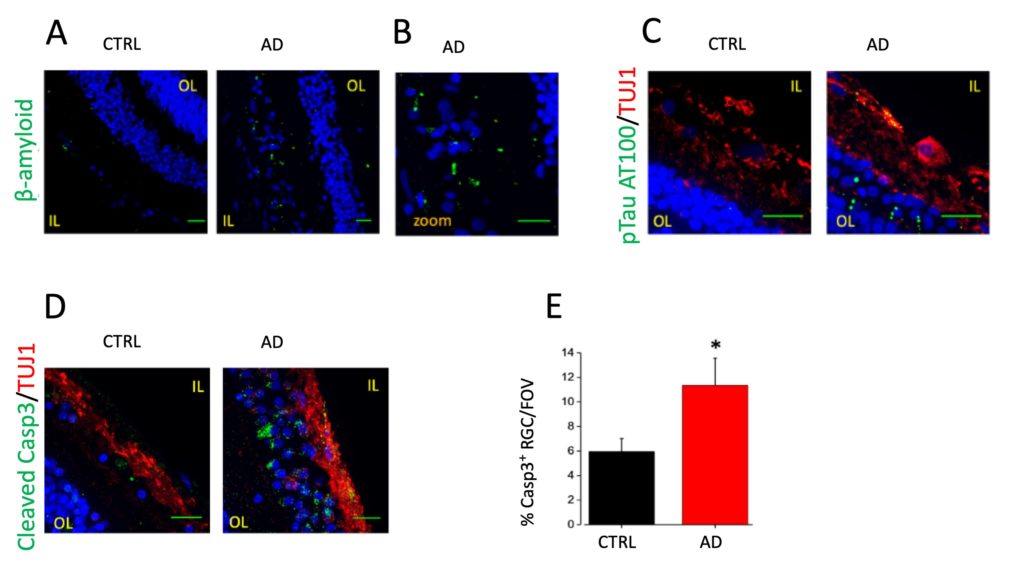 Nowadays, no biomarkers are available for non-invasive early Alzheimer’s disease diagnosis therefore their search, is of primary importance. Recent evidences suggest that, during the disease the brain is not the unique structure where proteins aggregates accumulate; in fact, several recent studies suggest that also the retina is affected by these processes. The main goal of our work was searching for proteins and cellular markers that could be considered in the panel of putative biomarkers for early and selective Alzheimer’s disease diagnosis. To this aim, we performed immunofluorescence analysis on human retinas obtained from controls and Alzheimer’s disease patients. As a starter the presence of beta-amyloid and Tau deposits has been examined. We detected higher level of both proteins in Alzheimer’s disease slices compared to controls.

During Alzheimer’s disease, aggregates formation in the brain is accompanied by neuronal degeneration that in turn, can trigger cascade events leading to inflammatory processes. We wondered if these cellular events occur also in the retina. To address this point, immunostaining against the cell death marker cleaved Caspase-3 and against the glial fibrillary protein GFAP a marker for astrocytes have been performed. As shown in Figure 1, the immunostaining for both proteins was increased in Alzheimer’s disease patients compared to controls confirming that both neuronal degeneration and inflammation are events that affect the retina during Alzheimer’s disease. Several different proteins have been shown to take part in the interplay among astrocytes, neurons and microglia during inflammatory response. 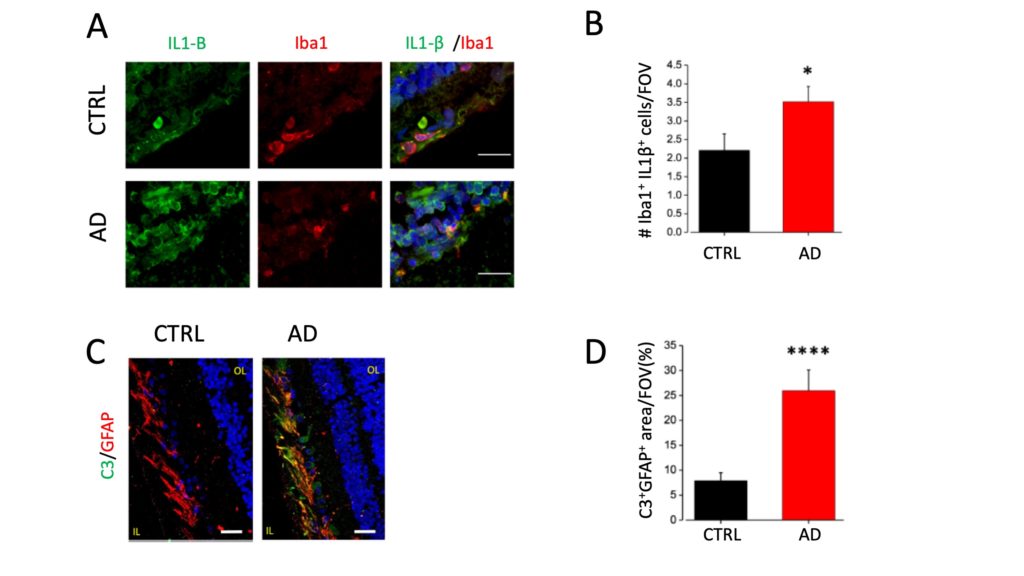 In our experiments, we reported an up-regulation in Alzheimer’s disease slices of some of these proteins such as IL-1β, TREM2, complement component C3 and osteopontin (OPN). All together these results suggest that astrocytic and microglia activation is present in Alzheimer’s disease retina. Our observations further support the possibility that retinal proteins aggregates may be used in the future for early Alzheimer’s disease detection. Future studies are needed in order to replicate these findings in younger Alzheimer’s disease patients. The retina is an anatomical structure very easy to examine therefore by developing biomarkers ligands and super-resolution microscopes a non-invasive diagnosis could be performed through retinal scan.