Proteins are the working-units of the cell, which are encoded by thousands of genes that pass their information into an intermediate molecule, the messenger RNA (mRNA). For this flow of information – from genes to RNA (transcription), and then into proteins (translation) – to occur properly, the cell has developed several check points and mechanisms that limit the occurrence and transmission of errors. Some of these mechanisms act at the mRNA level to ensure that the information transcribed from a gene will yield a proper functional protein after mRNA translation.

Nonsense-mediated mRNA decay (NMD) is a translation-dependent surveillance mechanism that rapidly degrades transcripts with premature stop codons (PTCs), like the ones bearing nonsense mutations. By this mean, NMD avoids the production of a faulty, truncated protein that could exert deleterious functions in the cell. However, with the development of high-throughput techniques for the last decades, researchers have found that NMD is more than just an mRNA quality control mechanism. This pathway targets around 10% of normal, wild type mammalian transcripts – called NMD natural targets – being a mechanism of gene expression regulation. These NMD-targets contain specific features that place their termination codons in a premature context, which include: i) a long 3’ leader sequence [also known as 3’ untranslated region (UTR)] that interferes with the normal translational termination process; ii) the existence of introns within the 3’UTR, which result in the deposition of exon junction complexes (EJCs), a group of RNA binding proteins recruited after mRNA splicing, that enhance NMD; and iii) the presence of upstream open reading frames (uORFs) – small coding regions located upstream of the main one encoding the expected protein – whose stop codons can be recognized as premature by the NMD machinery after their translation. 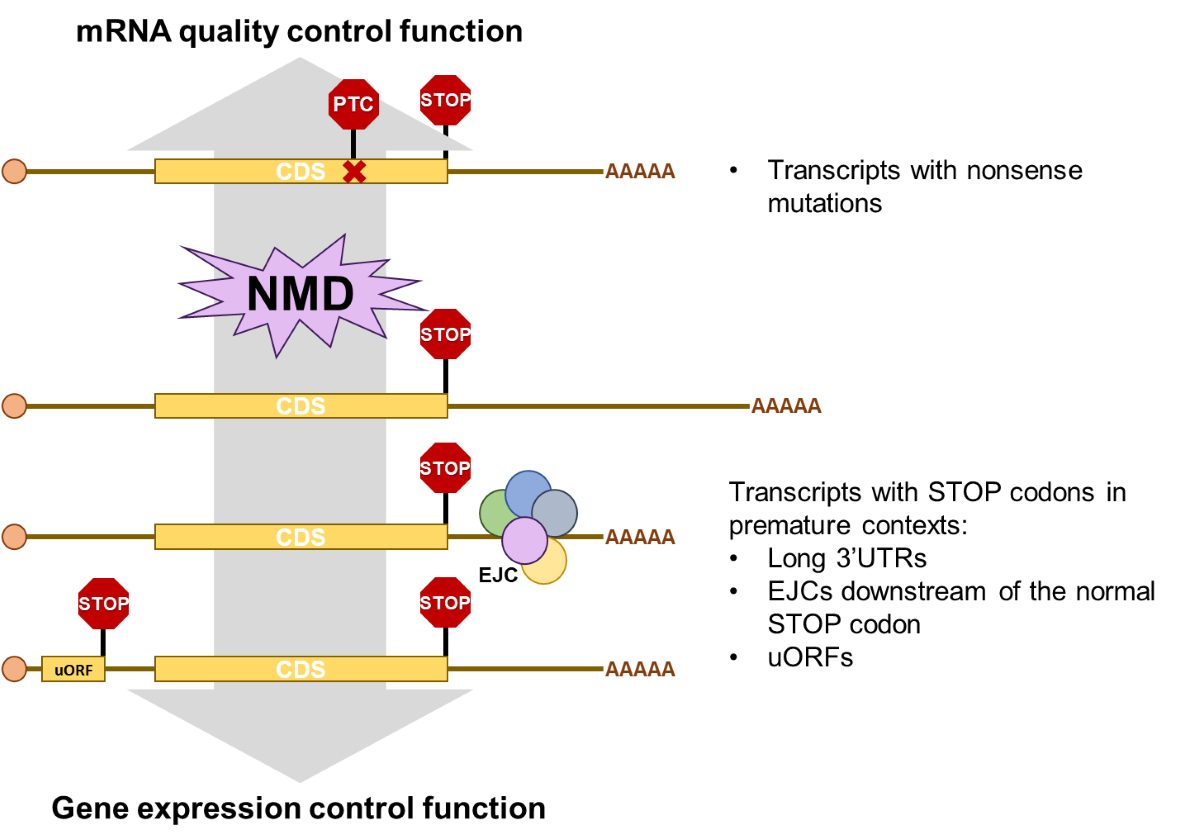 Fig. 1. The dual function of nonsense-mediated mRNA decay (NMD) in the cell. NMD degrades transcripts bearing nonsense mutations, as the novel stop codon is recognized as a premature termination codon (PTC). However, some normal transcripts can also be degraded by NMD, as they display stop codons in premature contexts. This includes transcripts with long 3’ untranslated regions (UTRs), the presence of exon-junction complexes (EJCs) downstream of the stop codon, and the existence of upstream open reading frames (uORFs). CDS: coding region of the mRNA.

The ability of NMD to control gene expression has been implicated in the regulation of several biological processes, such as mammalian development, cell differentiation and survival. Accordingly, NMD activity and, sometimes, its regulation, were found to be crucial to maintain embryonic viability and to drive liver development and regeneration, spermatogenesis, myogenesis and neural development, by ensuring the correct gene expression pattern required in these contexts. Also, NMD function is linked by a dynamic regulatory circuit with stress responses: during basal conditions, NMD degrades the transcripts encoding several stress-responsive proteins, when they are not required; during stress, however, phosphorylation of the α subunit of the eukaryotic initiation factor 2 (eIF2α) by specific kinases precludes translation initiation and, therefore, inhibits NMD action to allow the expression of those proteins responsible for solving the stress. When homeostasis is restored, eIF2α becomes active again, permitting NMD function to shut down the stress response.

Since its discovery, NMD has been associated with several human diseases, including β-thalassemia, cystic fibrosis, Duchenne’s muscular dystrophy and cancer. This is easily explained by the fact that around 30% of the genetic diseases arise from PTC-introducing mutations that, therefore, can be affected by NMD. Regarding cancer in particular, tumour cells have found ways to exploit both the quality control and the gene expression regulatory functions of NMD to adapt and proliferate; by selectively acquiring PTCs in tumour-suppressive genes, cancer cells use NMD to potentiate their unconstrained growth; conversely, NMD inhibition mediated by the tumour microenvironment provides the adaptive conditions necessary for tumour cells to survive and proliferate.

Hopefully, understanding the complexity of the molecular mechanisms and interactions that NMD establishes with the normal cellular and pathophysiological processes will help to develop new and more adequate therapeutic strategies for related diseases in the near future.