Small-molecule RETRA is effective against a fatal childhood cancer

The bone tumor Ewing’s sarcoma is one of the most aggressive cancers in childhood and adolescence. Before the era of chemotherapy, more than 90% of Ewing’s sarcoma patients succumbed to their disease. With the introduction of intensive treatment consisting of multi-agent chemotherapy in conjunction with surgery and/or radiation, survival rates in patients with localized tumors have increased to approximately 75% in high-income countries. However, the prognosis for the about 25% of patients with detectable metastases at diagnosis is still dismal, with only 10-40% survivors, depending on the site of metastasis. Even worse, of the patients who experience disease relapse, not more than 10% are cancer free at five years follow-up. The outcome for patients with metastasized or recurrent Ewing’s sarcoma, thus, is very disappointing, and new therapeutic approaches for these patients are clearly needed. 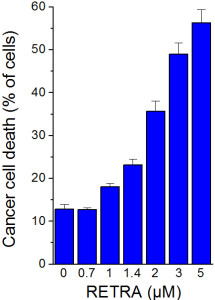 An intriguing new strategy to improve anticancer therapy is drugging a protein known as p53. The principal tumor-suppressor protein p53 is probably the most important molecule in cancer. This is highlighted by the fact that about half of human cancers have inactivating mutations of p53, making it the most commonly mutated protein in human cancers. p53 is less frequently mutated in Ewing’s sarcoma, however, the subset of Ewing’s sarcoma patients with mutant p53 is very unresponsive to chemotherapy and has a significantly poorer outcome than average. Therefore, Ewing’s sarcoma with mutant p53 represents a particular challenge in the management of patients with this disease.