The voltage-gated potassium channel, Kv1.3, at the crossroads of glial functions in glioma

Glioblastoma multiforme (GBM) is one of the most lethal cancers in adult humans, with a frequency of 6:100.000 people. Despite the current three-modality therapy, which includes surgery, radiation and chemotherapy, the clinical outcome of GBM patients remains poor, with a median overall survival of less than 15 months after diagnosis. One reason of the rapid tumor progression is its ability to migrate in the surrounding brain parenchyma evading the local homeostatic check points. This occurs in a (at least) two steps mechanism: initially GBM cells induce a protective reaction by glial cells in the brain. As a result, astrocytes and microglia cells activate to protect cerebral parenchyma from the toxic molecules produced by GBM, such as glutamate and metalloproteinases. Later, as GBM grows, tumor-derived factors induce an immunosuppressive microenvironment, modifying glial cell reactivity toward a pro-tumor phenotype, with the production and release of additional cytokines, chemokines, reactive oxygen species, nitric oxide and growth factors which, instead, sustain and promote glioma growth and invasion. Among the molecules highly expressed in the tumor microenvironment and possibly involved in tumor cell growth and invasion, we considered the voltage dependent potassium channel Kv1.3. This protein is expressed, in physiological conditions, in different regions of the central nervous system, by astrocytes and microglial cells, and, is also highly expressed on GBM cells. 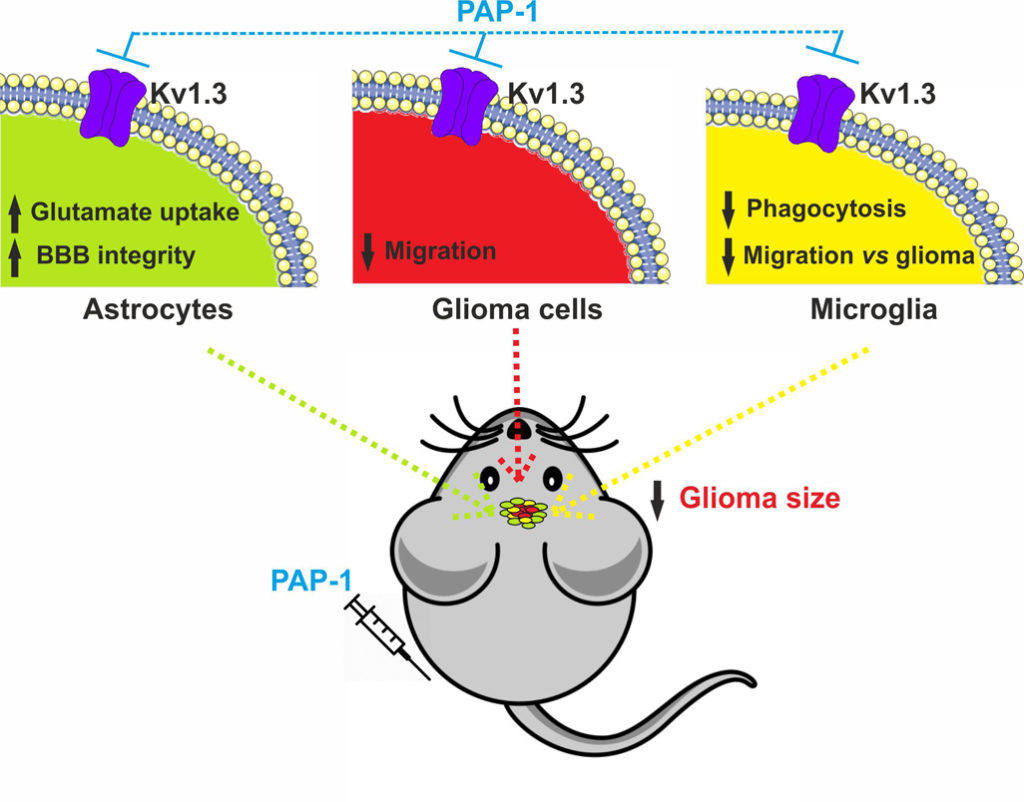 In this study we took advantage of a specific inhibitor of Kv1.3, the 5-(4-phenoxybutoxy) psoralen (PAP-1). In vitro, PAP-1 shows neuroprotective effects reactivating the glutamate buffering activity of astrocytes, likely reducing the sumoylation of the major glutamate transporter, GLT-1, that needs this post-translational modification to undergo processing in the endoplasmic reticulum, instead of remaining active at the plasma membrane in glutamate uptake. In addition, Kv1.3 inhibition on astrocytes also plays a role in the endothelial expression of the blood brain barrier (BBB) proteins, which could maintain BBB integrity in GBM. Kv1.3 blockade was also investigated on microglial cells, where PAP-1 treatment reduced phagocyting activity and cellular process movement in response to GBM, at least in part impairing microglia-tumor cell communication. In addition, to this indirect activities, PAP-1 directly reduced the invasive properties of glioma cells, through the blockade of the cell volume changes necessary for cell migration. All these in vitro observations prompted us to test the effects of Kv1.3 blockade in vivo, in a mouse model of glioma, where GL261 cells (a mouse glioma cell line) were transplanted in the brain of C57BL/6N mice. According to the in vitro data, we observed that treating glioma-bearing mice with PAP-1 strongly reduced tumor volume, up to 70% in comparison with untreated mice. Altogether, these findings (Fig. 1) suggest that Kv1.3 channels could represent potential targets to reduce GBM cells movement and to re-educate glial cells toward their protective, antitumoral activity, reducing brain parenchyma invasion and tissue damage in GBM.