A new hypothesis of autoimmune diseases: stress and the nucleolus

Autoimmune diseases (AIDs) have complicated pathologies influenced by genetic, epigenetic and environmental factors. Mechanisms of AIDs remain mysteries but numerous hypotheses have been proposed. Several hypotheses are discussed to present their unique explanations and to demonstrate that they are not mutually exclusive, in effect; combinations of these hypotheses could provide a more comprehensive explanation of AIDs. 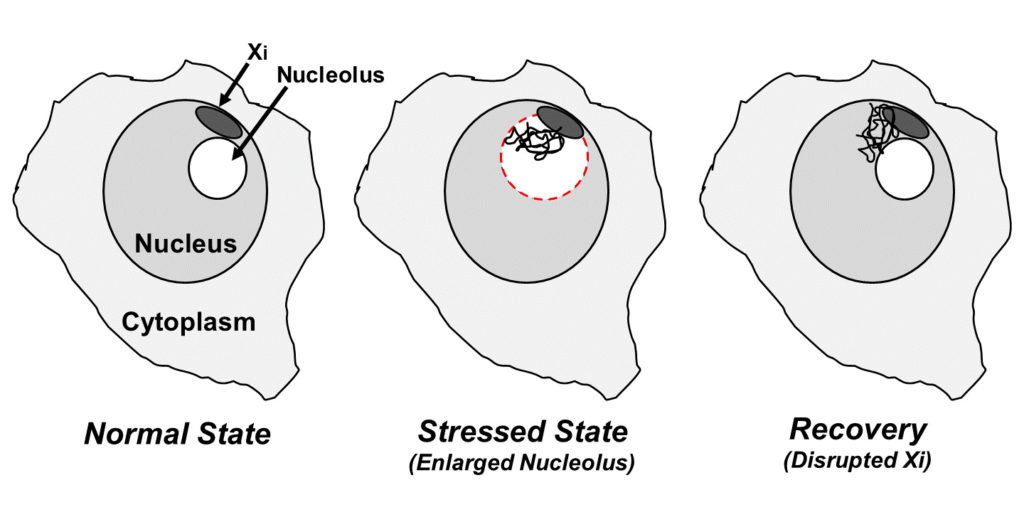 Fig. 1. Nucleolar stress can disrupt the inactive X chromosome. Normal State: The inactive X chromosome (Xi) is a dense structure of chromatin located at the nuclear periphery against the nuclear membrane. The Xi has 75-85% of its genes epigenetically silenced. In approximately one-third of cells throughout the cell cycle and 90% of cells in S phase, the Xi is in close association with one or more nucleoli. Stressed State: During cellular stress the nucleolus can expand rapidly, potentially engulfing neighboring chromatin, such as the Xi. This can expose the chromatin to high levels of polyamines that compete with histones and DNA methylation, disrupting the epigenetic control. Recovery: The disrupted chromatin could undergo activation and expression of previously sequestered genes. This could include thousands of Alu elements on the Xi that flood the nucleolus with Alu RNA that compete with other RNAs normally processed in the nucleolus. Abnormal activity in the nucleolus could lead to stabilization of abnormal conformations of RNAs, proteins and ribonucleoprotein complexes. These may be autoantigenic.

Here, a new hypothesis is described: the “nucleolus” hypothesis. The nucleolus is a site in the cell nucleus where RNA and proteins are folded and assembled into ribonucleoprotein (RNP) complexes used as miniature cellular machines such as: 1) splicosomes which trim pre-messenger RNAs down to messenger RNAs (mRNAs); 2) ribosomes which translate mRNAs into specific proteins; and 3) small nucleolar RNAs that assist in RNA processing in the nucleolus. Cells can have multiple nucleoli. Nucleoli appear as areas void of DNA but are surrounded by active and inactive chromatin (genetic material consisting of DNA and proteins like histones). The open space of the nucleolus allows for long RNA molecules to be folded and bind proteins to create functional RNPs. Because many different RNPs are produced by the nucleolus, and there is high demand for RNPs during cell growth, differentiation and stress, the nucleolus is one of the most active and dynamic components of the cell. Nucleoli rapidly increase in size when there is increased demand for RNPs. To assist in folding of negatively-charged RNA, nucleoli have a very high content of positively-charged small molecules called polyamines. Expansion of the nucleolus is directly related to increased availability of polyamines. Cell stress, such as a viral infection, typically involves increased polyamine synthesis since the virus, or the cell recovering from stress, requires increased nucleolar activity to create additional ribosomes, splicosomes, etc. However, polyamines at high levels can stabilize abnormal conformations of RNA, DNA, RNPs and proteins. These abnormal conformations could be autoantigenic since the immune system may not have had sufficient exposure to them previously. For example, Z-DNA is an infrequent and transient DNA conformation which appears as an autoantigenic target in systemic lupus erythematosus (SLE) and rheumatoid arthritis (RA). Many autoantigens in SLE are, at least transiently, components of the nucleolus where high polyamine levels could stabilize those components in abnormal conformations and associations.

Expansion of nucleoli during cell stress could potentially engulf some of the neighboring chromatin, exposing that chromatin to high levels of polyamines in the nucleolus. This could disrupt the chromatin, opening previously sequestered genes. Particularly vulnerable to such disruption is the inactive X chromosome (Xi) which is typically located at the nuclear membrane. The Xi is also the last chromosome to replicate in S phase and requires more effort to maintain its inactive state. In addition, the Xi is in close association with nucleoli in 90% of cells during S phase and approximately 30% of cells throughout the cell cycle, except during mitosis when the nucleoli disappear to reappear after mitosis. This places the Xi in a precarious position, sandwiched between the nuclear membrane and expanding nucleoli.

Xi have numerous sequences that could have roles in AIDs. This includes silent copies of polyamine genes but Xi disruption could lead to their expression giving increased polyamine synthesis which competes for S-adenosylmethionine needed for cellular methylation. Difficulties with methylation could lead to widespread disruption of epigenetic control of gene expression and of methylation-dependent transport of proteins and RNAs. In addition, the Xi has a high concentration of silent Alu elements that, if disrupted, could generate thousands of Alu RNAs that would flood the nucleolus, competing with RNAs normally processed in the nucleolus. Thus, nucleolar stress and chromatin disruption may explain some AIDs.