In terrestrial vertebrate animals, cholesterol is a major sterol lipid with multiple, critically important biological roles. In cells, it is a key constituent lipid of the plasma membrane, affecting its fluidity and stiffness and acting as an organizer of specialized membrane functional domains known as lipid rafts. It is a precursor for the synthesis of steroid hormones (for example estrogen, testosterone and corticosteroids), bile acids and vitamin D and it is also involved in cell signaling.

Cholesterol is supplied from our diet but also synthesized by cells de novo in the tubular compartment of their extended membranous network, the endoplasmic reticulum (ER). The cellular pool of cholesterol is determined by the balance of uptake of dietary cholesterol, its cellular biosynthesis, its conversion to storage forms (cholesterol esters), and its export. Thus, cholesterol homeostasis is a complex choreography relying on these different processes. Genetic mutations affecting these processes, for example in genes encoding sterol reductase enzymes catalyzing the later steps of cholesterol synthesis or the receptor mediating cholesterol uptake, are the cause of serious human diseases in cholesterol metabolism. The quest, therefore, to better characterize the molecular and cellular pathways underpinning cholesterol homeostasis remains as important and necessary as ever and a focal point of research interest.

Fig. 1. Effects of TMEM147 silencing in HeLa cells. Silencing of TMEM147 by RNAi causes reduction of LBR and DHCR7 protein levels as shown by Western blot (A), or by immunofluorescence and confocal microscopy, revealing loss of LBR signal at the nuclear envelope (compare B1 and B2). It also causes mistargeting of LBR with partitioning to the ER and NE, as seen by 3D-reconstruction of stacks of optical sections (compare C1 and C2). Scale bars 10μm.

In our study, we identified protein TMEM147, localizing at the ER and the nuclear envelope (NE), as a novel regulator of cellular cholesterol homeostasis. When we downregulated the expression of TMEM147 in human cells in culture (HeLa) by RNA interference, we found a drastic reduction of both Lamin B Receptor (LBR) and 7-dehydrocholesterol reductase (DHCR7) proteins, two essential sterol reductases involved in late steps of cholesterol biosynthesis (Fig. 1 A, B1-B2). LBR is a fascinating protein in its own right, initially characterized as a heterochromatin organizer in the nucleus via its N-terminal domain, but more recently also shown to, unexpectedly, exhibit sterol reductase activity at its C-terminus. We showed that TMEM147 has protein-protein interactions with both LBR and DHCR7 and co-ordinate transcriptional expression. Furthermore, we showed that silencing of TMEM147 not only causes LBR reduction but also results in mistargeting of the remaining LBR from its main localization at the nuclear envelope to partitioning to both the NE and the ER (Fig. 1 C1-C2), accompanied by changes in nuclear shape, loss of nuclear chromatin compaction and heterochromatin histone modifications, and reduced cellular viability. In our work, we showed that TMEM147 silencing did not influence the transcriptional levels of 3 β-hydroxysterol Δ-14 reductase TM7SF2, a reductase exhibiting some functional complementarity with LBR as they both catalyse the same cholesterol biosynthetic step.

Consistent with the remarkable interconnection between TMEM147 and the two key enzymes in cholesterol biosynthesis, a full lipidomic analysis revealed that in TMEM147-silenced cells total levels of cholesteryl esters were greatly reduced (Fig. 2A), and quantitation of the full spectrum of lipid species in cholesteryl esters displayed TMEM147 silencing-specific alterations (both decreases and increases) in several lipid species with decreases in saturated and short lipid species and increases in several polyunsaturated long fatty-acyl chains of the esterified cholesterol. Surprisingly, a small but significant increase in free cholesterol was also detected (Fig. 2A), which we found to be attributed to an overdoubling of exogenous cholesterol uptake (Fig. 2B). Thus, increased uptake, appears to be a mechanism employed by cells to counteract impaired cellular cholesterol biosynthesis due to the reduction of both LBR and DHCR7. Addition of exogenous cholesterol rescued cellular viability in TMEM147-silenced (and thus LBR/DHCR7-depleted) cells (Fig. 2C1, C2). 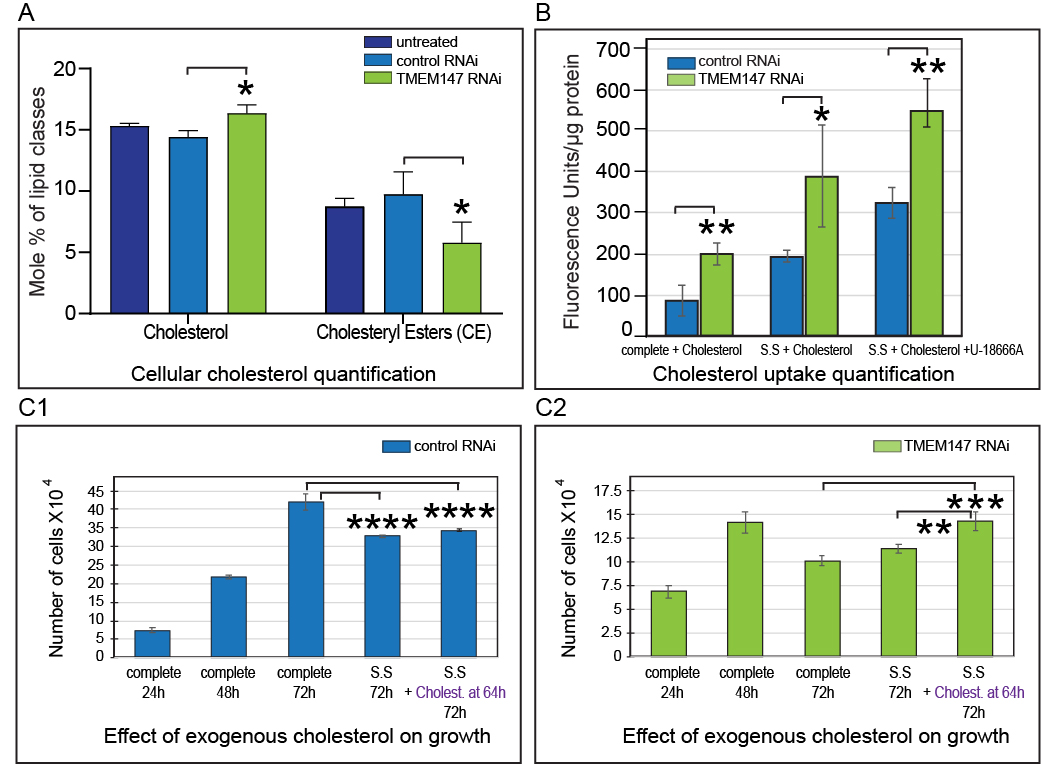 The article was selected by the Journal for inclusion in the ‘Research Highlights’ section of the same issue.
https://jcs.biologists.org